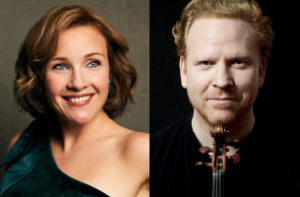 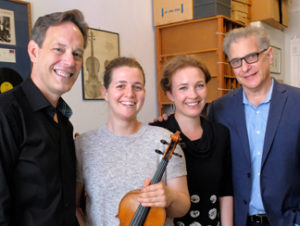 To commemorate the 75th Anniversary of the liberation of Auschwitz and with the support of a prestigious Hewlett 50 Arts Commissions grant from the William and Flora Hewlett Foundation, Music at Kohl Mansion has commissioned internationally-renowned American composer and Guggenheim Fellow Jake Heggie and his frequent collaborator, celebrated librettist Gene Scheer, to write a major new chamber work for the Violins of Hope.

Entitled Intonations: Songs from the Violins of Hope and based on the powerful stories told by musicologist and author James A. Grymes in his book Violins of Hope: Violins of the Holocaust Instruments of Hope and Liberation in Mankind’s Darkest Hour, the work will receive its world premiere on the Kohl Mansion stage on January 18 and 19, 2020. It will be performed by mezzo soprano Sasha Cooke and violinist Daniel Hope with a quartet of musicians from the San Francisco Opera Orchestra playing instruments from the Violins of Hope collection. Repeat performances are scheduled for later in January and February 2020 featuring mezzo soprano Nikola Printz and violinist Hannah Tarley.
Click here for event details.

“Both Gene and I are profoundly moved by the stories of these violins, and [they] immediately got our imaginations going,” said Jake Heggie. “There are so many stories to tell. I see in this project an opportunity to gather and engage a broad spectrum of communities on the West Coast for something beautiful, moving, historic and educational, with an important message for today.”

Jake Heggie is the American composer of the operas Moby-Dick, Dead Man Walking, Three Decembers, To Hell and Back, Out of Darkness, a triptych of Holocaust stories; and the recently premiered If I Were You. He has also composed more than 250 songs, as well as chamber, choral and orchestral works. The operas – most created with the distinguished writers Gene Scheer and Terrence McNally – have been produced extensively on ﬁve continents. Heggie is considered a relative rarity among modern composers – someone who can write music that is not just challenging, but rewarding for performers and audiences as well. Heggie chose his long- time collaborator, Emmy Award-winning American songwriter, librettist and lyricist Gene Scheer, for this commission. Together Heggie and Scheer have selected and adapted stories of courage and survival drawn from James A. Grymes’ book.

Gene Scheer has collaborated with Jake Heggie on many projects, including the 2010 Dallas Opera world premiere, Moby-Dick; Three Decembers (Houston Grand Opera); and the lyric drama To Hell and Back (Philharmonia Baroque Orchestra); Camille Claudel: Into the fire, a song cycle premiered by Joyce di Donato and the Alexander String Quartet; It’s a Wonderful Life premiered by the Houston Grand Opera; and in August 2019, If I Were You, for San Francisco Opera’s Merola Opera Program. Mr. Scheer was librettist with Tobias Picker on An American Tragedy; wrote lyrics for Wynton Marsalis’s It Never Goes Away; wrote the oratorio August 4, 1964 with composer Steven Stucky; collaborated with Joby Talbot on the opera Everest; and wrote the Grammy-nominated operatic adaptation of Cold Mountain with Jennifer Higdon.

The William and Flora Hewlett Foundation is a nonpartisan, private charitable foundation that has been making grants to support the performing arts in communities across the San Francisco Bay Area for more than 50 years. The Hewlett 50 Arts Commissions, a five-year, $8 million initiative celebrates the foundation’s 50th anniversary by supporting the creation and premiere of new works by world-class performing artists in Bay Area communities.