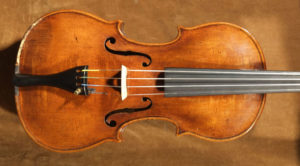 The Auschwitz violin was made in the workshop of Schwietzer in Germany, around 1850. This instrument was originally owned by an inmate who played in the men orchestra at the concentration camp in Auschwitz. And survived.

Abraham Davidowitz, who fled Poland to Russia in 1939, later returned to post-war Germany and worked for the Joint near Munich, Germany, helping displaced Jews living in DP (Displaced People) camps.

One day a sad man approached Abraham and offered him his violin, as he had no money at all. Abraham paid $50 for the violin, hoping that his little son, Freddy, will play it when he grows up.

Many years later Freddy heard about the Violins of Hope project of the Weinsteins and donated his instruments to be fully restored and come back to life. Since then this violin, now restored to perfect condition, has been played in concerts by the best musicians all over the world. Almost.

It is important to note that such instruments were very popular by Jews in Eastern Europe, as they were relatively cheap and made for amateurs. This particular violin was made in Saxony or Tirol in a German workshop. It carries a false label: J.B. Schweitzer, who was a famous maker in his day.

Made by Johann Gottlieb Ficker around 1800.
This violin was a life-time friend of Moshe Weinstein, our first generation violin maker. Born in a Shtetl in East Europe little Moishale fell in love with the sound of the violin. It happened when a klezmer troupe arrived in the shtetl to play at a rich man’s wedding. While all children gathered under the table to hide and steal sweets, Moishale was hypnotized by the sound of music. After a few festive days the troupe left and so did Moishale who followed the klezmers out of town. His mother, Ester, looked for the boy to no avail.

Well, when he was found and dragged back home, he was first punished and then – got a very simple violin! This was a turning point in our family history. Moishale learnt to play by himself and later studied in the music academy in Vilna, where he met Golda, a pianist, and both immigrated to Palestine in 1938.

Before leaving Europe, Moshe Weinstein went to Warsaw to study with Yaacov Zimermann to repair string instruments. Since most Jews play violins, thought Moshe, they would need a violin maker in the new land. He first worked in an orchard picking oranges and a year later opened a violin shop in Tel Aviv.

Loyal to the tradition of helping out young prodigy kids making their first steps in music, he supported many Israeli talented children among them – Shlomo Mintz, Pinchas Zukerman, Yitzhak Perlman and many others. 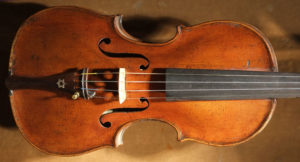 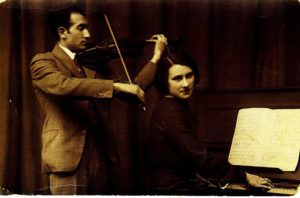 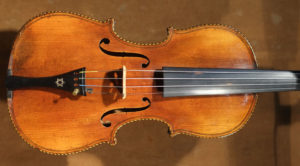 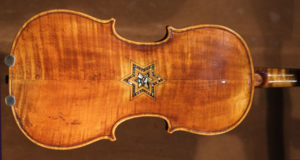 The Bielski violin, a Kleizer instrument with a mother of pearl star of David.
A German made instrument, probably around 1870.
This is a klezmer’s violin. Most klezmers were self-made and self-taught musicians with a natural talent for music. While many arts were not encouraged by Jewish tradition, music became one of the very few venues available to artists.

It was quite common to young children to play violins, as told by I.L. Peretz, the Yiddish writer, who wrote in one of his short stories that one could tell how many boys were in a Jewish family – by counting the number of violins hanging on the wall.

This is probably the reason why so many klezmer instruments were decorated with the most known Jewish symbol – a Star of David. Most klezmer violins were cheap, made in Czechoslovakia or Germany, in shops that specialized in making ornamented violins.

The klezmer tradition was almost lost during WW2, but lately there is some revival in Europe as well as in Israel and the US.

The restoration work of this violin is dedicated to the Bielski partisans who lived, fought and saves 1230 Jews during the war. Assaela Weinstein, Amnon’s wife is the daughter of Assael Bielski, one of the three brothers who formed the Bielski brigade in Belarus.

Made by Brother Placht workshop in Schonbach, Germany around 1880.
Feivel Wininger lived in Romania with his elderly parents, wife and baby daughter, Helen. In October 1941 Feivel and thousands other Jews were deported by train to the swamp land of Transnistria and further into the Ukrain. The suffering and horrors of this exodus was harsh, but Feivel never gave up.

Finally, in the Ukrainian ghetto of Shargorod, he found a way to survive. A famous judge who was an amateur violinist recognized Feivel as the gifted child-violinist he was years ago and gave him his Italian, Amati violin. Feivel, who labored chopping wood for local Ukrainians tried the violin and his life changed. All of a sudden there was music. And hope.

A local Ukrainian peasant let him play at weddings and holidays in exchange of food and leftovers.   Feivel lost his precious violin a short while later, but found a way to bring food to his family and some 17 people playing Ukrainian and Romanian music on another violin.

Many years later, in Israel, Helen brought her father’s violin to be repaired in the Weinstein’s workshop in Tel Aviv, so her old father could play again. Upon hearing this incredible story, the Weinsteins repaired the violin and since then, it is a part of Violins of Hope and serves as a memorial to a man of courage and industry, a man of vision and kindness. 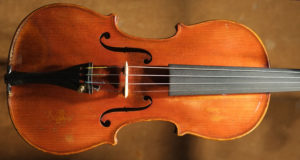 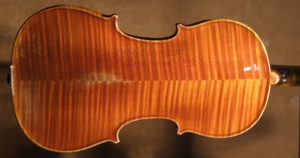 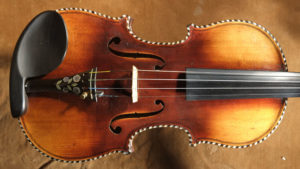 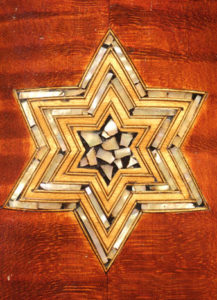 The German Violin with Star of David

This is the most beautiful Klezmer violin we ever had. The violin is first class hand-made instrument, and the star of David is simply magnificent! It is made of mother of pearl and we believe it was owned by a wealthy Klezmer, as it probably, was more expensive than the regular instruments. It is a hand-made violin, around 120 years of age.

Yaacov Zimermann was one of the first Jewish violin makers in Warsaw. Shimon Krongold was a wealthy industrialist there and an amateur violinist, who ordered a violin made by Zimermann. Zimermann made him a fine instrument with a lovely Star of David inlaid on the back. Inside the violin he glued a label in Yiddish:

I made this violin for my loyal friend Shimon Krongold , Yaacov Zimermann, Warsaw, 1924.

When war broke in 1939 Shimon managed to escape to Russia and ended up in Tashkent, Uzbekistan, where he died of typhus towards the end of the war. A few years later a survivor from Tashkent came to the Krongold family in Jerusalem with the story of his death and a violin in hand. Shimon was the uncle of the Krongolds in Jerusalem, who paid for the violin and kept it in memory of their uncle.

It is important to note that before the war Shimon Krongold helped some Jewish prodigal children, among them Michel Swalbe, who used to get music lessons in Krongold’s home. Swalbe later became the leading violinist of the Berlin Philharmonic Orchestra and remembered Krongold as his benefactor. 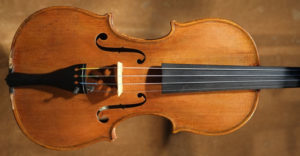 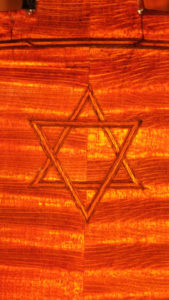 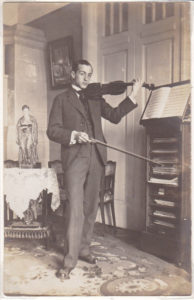 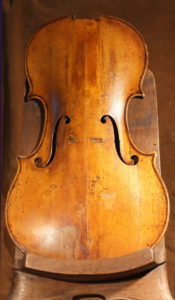 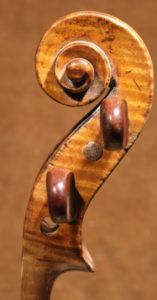 This violin tells the story of two Holocaust survivors. Born in Hungary in 1925, Valeria Teichner started violin lessons at age six. In 1944, she was deported to Auschwitz. On the cattle train to the camp, she forgot her violin. Arriving at the camp, she went through a “selection,” where she lost her mother and was sent to several work details. A capo (a prisoner forced to supervise work details) used to play his violin every evening. “He played well,” she said.

On Christmas Eve, all prisoner-musicians were to play and sing for the commanders. Teichner was among those and sang “Lorelei,” accompanying herself on the violin. The next day, the officers’ cook threw a piece of cake for her over the fence — a terrible crime. The capo sentenced her to be hanged and called out: Geigerin heraus! (“Violinist – out!”). He then changed his mind, hit her in the face, and let her stay. She was liberated by the Soviets on May 8, 1945.

Teichner soon met Sandor Fisher — the owner of this violin — and married him. Sandor was born in 1919 in Romania, where he started violin lessons at age six and studied singing and acting for 12 years. At 18, he changed his name to Farago Sandor to avoid persecution as a Jew, and he became a part of the local opera company. When the situation for Jews worsened and his father was conscripted to hard labor, Fisher and his violin went along to the work camp. Soon he was ordered to play for the officers during dinner and so was able to smuggle leftovers for his friends.

In 1944, Fisher managed to escape the labor camp and join the Soviets. After the war, he married Valeria Teichner, and the couple stayed in Hungary for some years until emigrating to Israel. They raised a family of three daughters, along with grandchildren and great-grandchildren. All along, his daughters said he never parted with his violin, and he played it to the end of his days.

The Berlin violin, the Gypsy violin

On January 27th 2015, International Holocaust Day, the Berlin Philharmonic Orchestra held a festive concert sponsored by Franz-Walter Steinmeier, then the Foreign Minister of Germany, and today the president of the German Republic, celebrating Violins of Hope. It marked 70 years to the liberation of Auschwitz by the Soviets. That day we got a new violin with a unique history. Sabine Conrad, a German young woman gave us the violin which was given to her many years before by an 80 year old man, an old committed communist and a devoted violinist, Erich Winkel. Sabine took care of Erich who gave her his beloved violin as a token of gratitude and appreciation. Erich bought the violin from a Gypsy when he played in the communist youth orchestra. The orchestra used to play in the early 30’s in red wedding community in north Berlin, and was often attacked by Nazis, even before the Nazis came to power. Erich was very proud of his instrument which, he said, survived many ferocious attacks by Nazi hoodlums. And now it plays in concerts the world over, telling his personal story as well the sad story of that era. 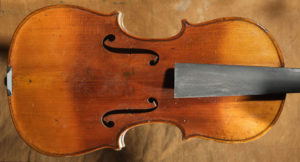 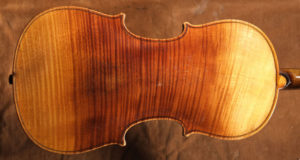 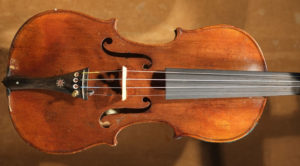 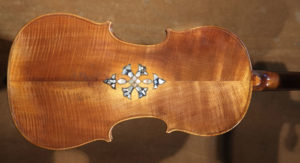 A violin dedicated to American soldiers

The reconstruction work of this violin is dedicated to the memory of all soldiers who fought alongside the Allies against the Nazis; to all those who died so that we can live in a world free of fear. It was repaired in 1899 by J. Panzram in Elmdale, Kansas.

This violin came to us in a very bad condition. The signs on it shows clearly that it was played in the worst conditions you can imagine. The top has no varnish. The inside parts are glued and nailed in un professional way. We believe it might have been played in a camp or getho and was repaired in any way possible, just to give the owner a bit more time to play…We decided to leave it as is, so people can see how some of the instruments look like when we get them, and maybe, by seeing it, imagine what some of them and their owners had to go through. 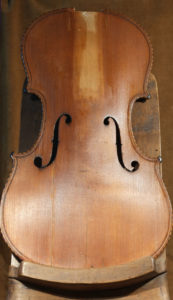